Heilan Coo
Spring sale on all art and prints! 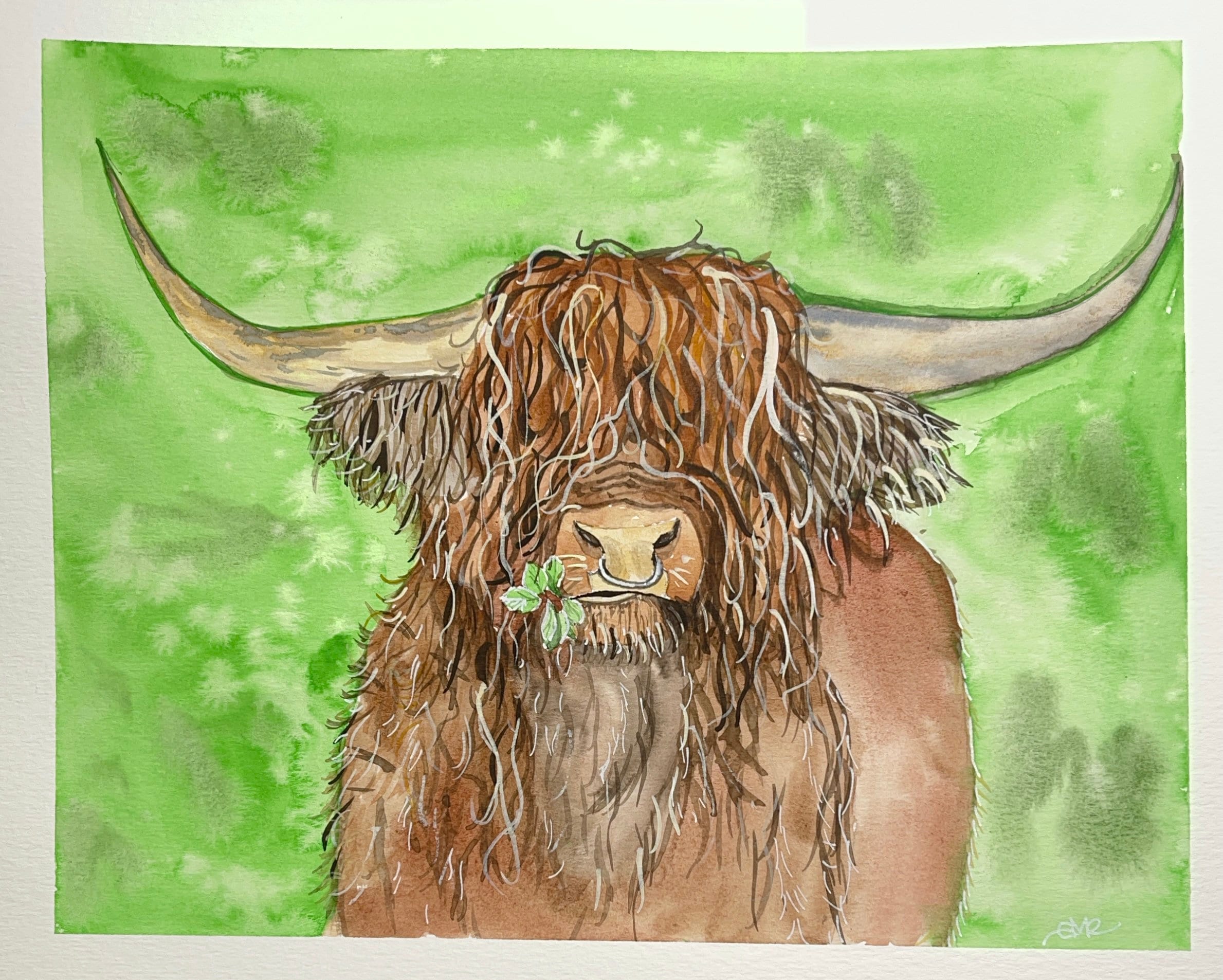 Original watercolor painting 11 inches by 14 inches on 200 gram watercolor paper. Final work has a sealed surface to protect against dust and humidity.

This is Kyloe. To most native passers-by he appears to be a dun Heilan Coo but his mission extends beyond the agrarian. He labors in service of Queen and country on the trail of a mystery he uncovered nearly a quarter century ago.

The mystery’s beginnings were discovered quite by accident while on vacation with his family in the Scottish Highlands. He came upon what was most distinctly the entrance to a leprechaun burrow while foraging for grass amongst the nettles. Over the years his investigation has revealed that a small leprechaun clan escaped capture on the Emerald Isle in the late 1960’s. They apparently set sail from Ballycastle and deftly navigated past the craggy Isle of Mull and up the Firth of Lorn. They beached their boat near a westerly bend in the Firth near Corpach and headed north on foot.

Kyloe has utilized his honed skills as an investigator to slowly tighten a circle around the clan. If he could see better he is almost certain he would have seen them by now. His greatest evidence comes through his fuzzy ears; he knows the sound of the bodhrán and tin whistle are not common to these lands and he hears them often.

Should he catch one of the auburn-haired shoemaking interlopers he knows just what he will wish for before turning his quarry over to MI-5. His greatest wish is to have sweet clover delivered to his own mountain chalet in the Rocky mountains. He is almost certain he could make a career as a professional snowboarder if he could spend a little less time hunting for food and hunting leprechauns. He was able to watch the “Flying Tomato” Shawn White in the 2010 Olympics through a farmhouse window and felt immediate kinship. Never had he seen a biped that looked so similar and made him feel like he had a cousin in a strange land. Since that day, his singular desire has been to catch this leprechaun so he could spend the rest of his days shredding the gnar.

As soon as he finishes his mid-late-afternoon second meal he will tighten his circle yet again.